YoMo (the Youth Mobile Congress) is the international science and technology fair, organized alongside the Mobile World Congress in Barcelona. LCATM has participated with four scientific outreach activities revolving around the code of life: the genomics of adaptation, the diversity of organisms, human evolution and primitive technology. LCATM has translated its partner research groups’ scientific contents through the design, development and implementation of outreach activities on the citizen science project on adaptation genomics “Melanogaster: Catch the Fly!”, the interactive educational game on marine ecosystems “SeaDance”; a manipulative proposal to show the technology of prehistory; and an archaeological adventure in search of the origin of humanity. LCATM partnered with several leading and avant-garde research centers and institutions to bring them together in the same space: the Laboratory of Evolutionary and Functional Genomics (González Lab, IBE, CSIC-UPF) of the Institute of Evolutionary Biology of Barcelona (IBE), the Institute of Marine Sciences of Barcelona (ICM-CSIC), the Milà i Fontanals Institution of Barcelona (IMF-CSIC) and the Catalan Institute of Human Paleoecology and Social Evolution (IPHES), based in Tarragona.

“Ciència i Convivència” (‘Science and Society’)

“Melanogaster: Catch the Fly!” (#MelanogasterCTF) and its international counterpart “aDaptNAtion” is the first European citizen science network on adaptation genomics. With a current network of… 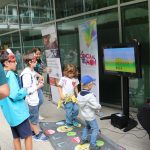 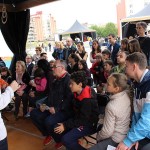