NOVUM was the Science, Technology, and Innovation Festival of the city of Barcelona, celebrated in 2015, an opportunity for its citizens to interact with science, technology and innovation, which filled the streets with the help of researchers, artists, creators and entrepreneurs, with a program full of activities for all audiences. LCATM partnered with several top research groups of the Institute of Evolutionary Biology (IBE, CSIC-UPF) from Barcelona to translate their research activity in dynamic, easy-to-learn activities designed and developed by LCATM, teaching citizens about language evolution, genomic adaptation, and human evolution.

“La Festa de la Ciència i la Tecnologia” (The Science & Technology Party) is a science outreach event organized by the Municipality of Barcelona, where citizens learn directly from professionals about scientific and technological topics of interest. LCATM has partnered with top research centers, such as the Institute of Evolutionary Biology (CSIC-UPF) of Barcelona and the Institute of Marine Sciences (ICM-CSIC) to create, develop and manage the workshops in which the researchers teach citizens about mutations, biodiversity, model organisms such as Drosophila melanogaster, as well as through SeaDance, an interactive game in which the participants, through body movement, must manage to keep in balance a marine ecosystem.

In the PRBB Open Day, the Barcelona Biomedical Research Park opens its doors to the general public, with scientists and other staff from the centers…

Explains how evolution is caused by the changes that occur in populations of organisms across generations. General objectives: To provide students with the opportunity to… 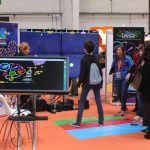 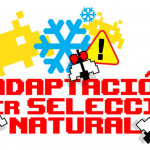