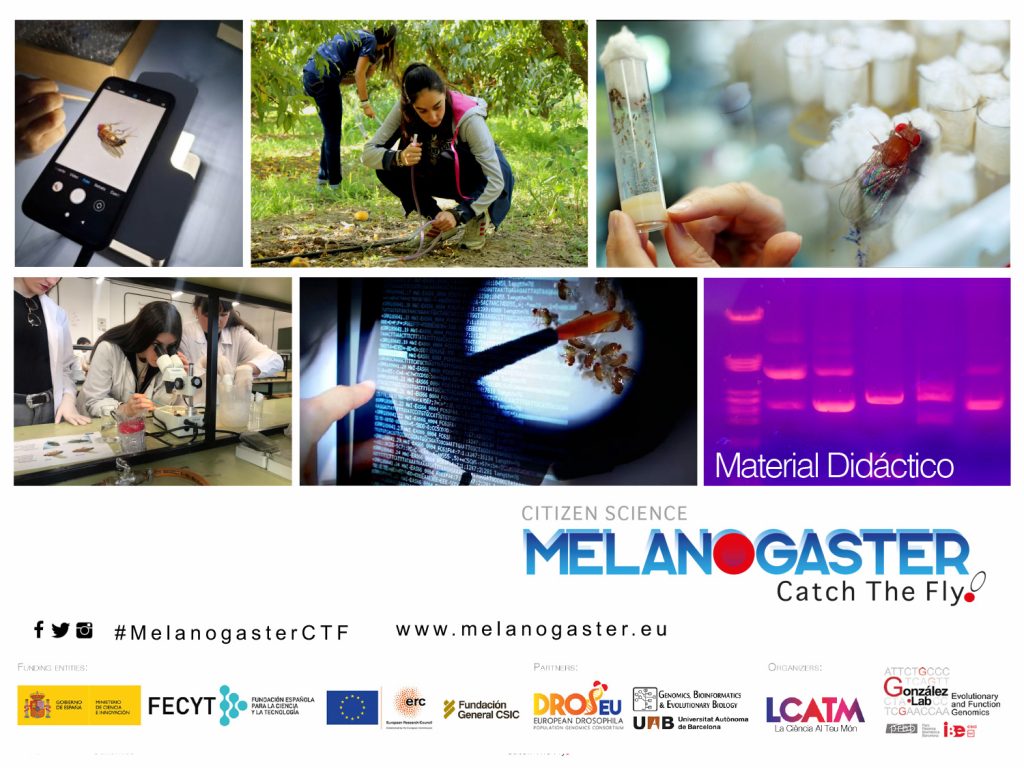 “Melanogaster: Catch the Fly!” is a citizen science project on genomics of adaptation led by Dr. Josefa González, principal investigator at the Laboratory of Evolutionary and Functional Genomics (González Lab) of the Institute of Evolutionary Biology (IBE, CSIC-UPF) at Barcelona, and co-founder of the European Consortium for Genomics of Drosophila Populations (DrosEU). The project is co-led by Roberto Torres, director of the science dissemination association La Ciència Al Teu Món (LCATM, Science in Your World, LCATM).

The project also involves the participation of the Genomics, Bioinformatics and Evolution (GGBE) group of the Department of Genetics and Microbiology at the UAB; and the European Consortium for Genomics of Drosophila Populations (DrosEU). This project in also conducted with funding from the Spanish Foundation for Science, and Technology-Ministry of Science, Innovation and Universities (FECYT); the European Research Council (H2020-ERC-2014-CoG-647900) (ERC); and the General CSIC Foundation (FGCSIC). The project aims to bring science and research closer to high school students, teachers and the general public of Spain, and other European countries in the framework of a European research project granted to Dr. González by the European Research Council (ERC).

This is the first research project on genomics of adaptation carried out across the whole of Europe, and its main goal is to identify the changes and the molecular mechanisms by which organisms adapt to different environmental conditions. It involves more than 67 high-level research laboratories in genomics of adaptation in more than 29 countries from all over the world.

Melanogaster: Catch the Fly! started in 2016, and since then the number of participating schools has not stopped growing making it possible to repeat every year. During these years, its participants, besides learning relevant and key concepts in biology, genetics, and scientific research, will be collaborating and participating in achieving the scientific objectives of the project.